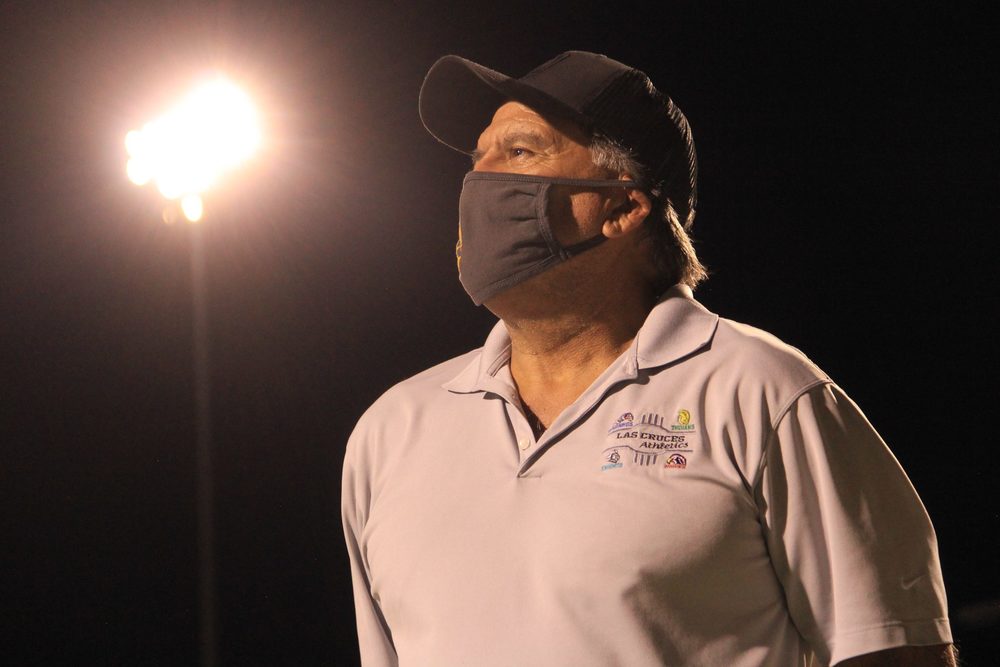 After more than 38 years with Las Cruces Public Schools, esteemed athletic director Ernest “Ernie” Viramontes was selected among New Mexico educators to be inducted into the New Mexico Activities Association (NMAA) Hall of Fame. This prestigious accolade was initially announced in 2019 and Viramontes was inducted in the NMAA Hall of Fame for 2020. Inductees are typically honored in Albuquerque during a press conference and in March during the state basketball tournament, but with COVID-19 having an impact on fans being able to attend games, the celebration was postponed until the annual fall conference for Athletic Directors in September 2021.

For nearly four decades, Mr. Viramontes has played an important role in education at Las Cruces Public Schools. He started his career at LCPS as an educator, then moved on to become a counselor and assistant principal before taking over as the districts’ athletic director. His career encompasses state championships in a variety of sports including football, basketball, soccer and cheer.

Viramontes has a passion for seeing students thrive not only in sports, but academically in the classroom where it all starts. At every game, you’ll find him on the sidelines or just beyond the end zone making important decisions that are best for students. The feeling that will never fade is the excitement of the game that draws in a crowd of fans, cheering for their loved ones. At each event, Mr. Viramontes takes in the sight at the Field of Dreams where parents and community members come together to support students.

“Sports teaches you the game of life,” said Viramontes. “You have goals and it’s a great way to teach you what life’s all about — the up’s and down’s, winning and losing, or facing a tragedy in your family. It teaches you how to win and lose with class and just learn that tomorrow morning is another day, you get up and you keep going.”

The second youngest of six children, Viramontes grew up on a farm a few miles west of Deming where he shared memories with his family. At an early age, his father, P.O. Viramontes and mother, Flora Gómez Viramontes instilled the importance of responsibility, dedication, and having a work ethic to be proud of. As a child, Viramontes would start his chores at 4 a.m. before sunrise so he could stay after school to play football and basketball. He never lost sight of that dedication and passion for sports as he went on to become a two-year letterman winner in football and basketball. He was an All-District and All-State selection in football and an All-District pick in basketball. Though he took athletics seriously, Viramontes always put his studies at the forefront of everything. He was involved in student council and the National Honor Society at Deming High School.

“My dad was a farmer his whole life but he wanted us to have options,” said Viramontes. “That was the only option we got when we graduated high school, you either stay on the farm or you go to college.”

Following his graduation at Deming High School in 1979, Viramontes attended New Mexico State University, earning his bachelor’s degree in physical education with a minor in math in 1983, he went on to get an administrators license and his master’s degree in bilingual counseling in 1993. Viramontes started his career as a P.E. teacher at Central and Fairacres Elementary in 1984. He was a coach and teacher at Picacho Middle School, a coach, counselor and assistant principal at Sierra Middle School, academic dean and athletic director at Las Cruces High School, assistant athletic director and, since 2005, athletic director for the school district.

In 2004, Viramontes moved to the Las Cruces Public Schools Central Office, where he first served as assistant athletic director for two years before becoming the district athletic director in 2006, a position he still holds today. During his time as district AD, Viramontes has been instrumental in several facilities improvements including the addition of the Field of Dreams baseball and soccer complexes, and the addition of turf on the football field at the Field of Dreams. In addition to his teaching and administrative duties, Viramontes has coached track, football and basketball at the middle school and high school levels for LCPS.

“I am truly blessed working for this district that has given me so much,” said Viramontes. “This is a team effort and I couldn’t get the job done without the people I work with, my staff. I would like to thank my family for always supporting me and inspiring me every day. Finally, I would like to thank the athletes and the people here in Doña Ana County. Thank you for giving me the opportunity to serve my community.”

The NMAA Hall of Fame includes individuals who have made significant contributions to interscholastic education in the State of New Mexico over an extended period of time. The Hall of Fame Selection Committee invites nominations for potential inductees.

The NMAA Hall of Fame was established in 1976 and is comprised of an elite group of 108 accomplished individuals who have made significant contributions to interscholastic athletics and activities in New Mexico. In order to be considered, nominees must show great support of the NMAA’s philosophy and objectives, they must have a combination of involvement in formulating regulations and procedures for various interscholastic education programs, and they must have a minimum of 25 years of service, 20 of which must have been in New Mexico.

Nominations are then screened by the NMAA Hall of Fame Selection Committee which consists of current and former leaders within interscholastic athletics and activities. The committee meets in October each year and then selects a maximum of four individuals for induction.